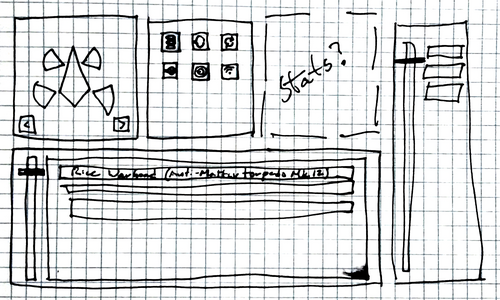 So, for the last week I haven't been able to work on SsC2 (or anything) because my dog developed an corneal ulcer and I have been using all my free time to be with and watch him so he doesn't rub it worse.

It looks like it'll be another week at least until he'll be better :(

In the mean time, I've been sketching some GUI ideas and think I've settled on an inventory management, that'll allow you to move components from ship-to-ship and open the door for taking control of derelict ships.

I've also been working out how to implement actual turrets for the ship's weapons, so they'll have a rotation speed which will allow more tactical choices during combat. Being at a larger distance from your target, your movement will have less angular distance allowing turrets to track you, while closer your angular distance will be much greater giving less time for the turrets to move in range, while also making false sensor readings (when the turret thinks the target is somewhere else resulting in a wrong firing angle) less impactful and more likely to hit you.

So, hopefully in a week, my boy will be better where I don't have to watch him to keep him from rubbing his eye and I can continue work on SsC2.

Also, since There will be a week of no development, now's the time to get suggestions in so I can plan and implement them!